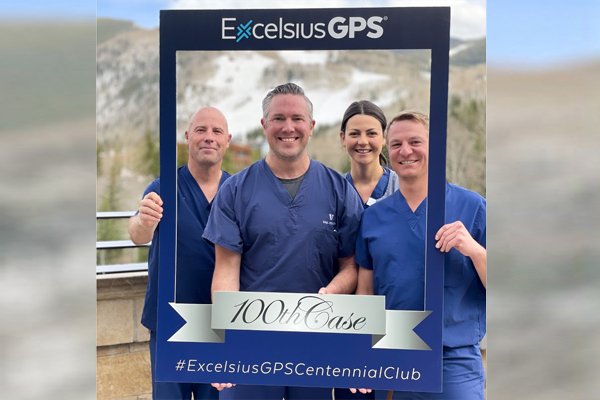 VAIL, Colo. – Known worldwide as one of the leaders in orthopaedic surgery at the forefront of medical technology and advancement, The Steadman Clinic’s surgeons have regularly reached milestones in innovative practices and surgical techniques.

Dr. Gallizzi joined The Steadman Clinic on March 14 after several years of practice in the Denver area. In 2019, he became the first surgeon in the state of Colorado to perform a robotic spinal procedure. Less than three years later, the Detroit native has joined a short list of spinal surgeons worldwide who have eclipsed the century mark in applying the fast-growing technique of robotic surgery.

Robotic surgery offers a long list of advantages for the patient.

“The robotic procedure allows the patient to spend significantly less time in the operating room,” said Dr. Gallizzi, “and that is always a big plus. The accuracy, planning and placement of the hardware for fusion in a robotic procedure is superior to it being placed manually by hand with X-ray guidance or even just with navigation.

“The robot holds the trajectory and follows a pre-programmed plan in the procedure,” continued Dr. Gallizzi. “The robotic system that I use (Globus Excelsius)—as opposed to other competitive systems—actively tracks the patient during the procedure as opposed to being a passive-tracked image guidance system.”

In robotic spinal surgery, it’s all about the tiny details.

“With the robot itself, you can actually watch the patient breathing and see the subtle movement that occurs during surgery,” said Dr. Gallizzi. “You can time the intervention, placing the screws, drilling the holes for hardware placement with the patient’s breath. That drastically improves the accuracy of the surgery.”

Even the tiniest variance can be avoided during robotic procedures.

“The robot has a face plate that tells you if the instrument you are using is being deflected in any subtle way. If its path is altered by soft tissue, by anatomy or by the weight of the drills or handles that you are using to put the screws in, the robot will detect this. Any slight alteration in its path will be noted and can be avoided with the use of the robotic tool.

“Simply put,” adds Dr. Gallizzi, “the robot method offers the highest accuracy of hardware placement to decrease the risk of putting screws where you don’t want them to go.”

The use of cutting-edge technology is nothing new for the surgeons at The Steadman Clinic or the scientists and researchers at Steadman Philippon Research Institute (SPRI). The addition of Dr. Gallizzi and his proficiency in this modern method of robotic spinal surgery continues The Steadman Clinic’s legacy of innovation.

Dr. Gallizzi is actively involved on an advisory team that is designing future applications in spine surgery. Changes and advancements in the field of robotic surgery are happening daily. Improvements to procedures will be put to use expeditiously by Dr. Gallizzi as they are tested and approved.

It took less than three years for Dr. Gallizzi to perform his first 100 robotic surgeries. There are hundreds more in his future, with patients of The Steadman Clinic reaping the many benefits of the innovative and technologically advanced methods of robotic surgery.